Esports is a growing industry of competitive skilled gamers. Recognizing its popularity and market demand, Albertus created a Bachelor of Arts and Bachelor of Fine Arts in Game and Computer Arts in 2019, along with the Minor in Esports Administration and Management in 2021. A student-led Esports club was formed and Albertus partnered with CDW-G and Horizon AVL to magnify the exciting Esports experience to campus.

Sign up to learn more about esports club and programs at Albertus Magnus College.

Albertus Magnus College held its first ever Esports camp on July 14, 2021. It was an experiential day where participants learned how education, gaming, and Esports all fit together. During the day there was a talk from an Esports/gaming keynote speaker, as well as experiential components of participating in a tournament and designing your own 3d world.

August 9 | 9:30am - 3:00 pm | Albertus Magnus College Campus
Are you into Gaming or Esports?  Interested in Game Development? Being a caster for Esports events? Looking for a community to play with while you're in college?  If any of these sound interesting to you, then you need to check out the Albertus Magnus Esports Camp on August 9 from 9:30am - 3:00 pm!

If you apply to Albertus Magnus College we’ll even award you scholarship money for your talents!  You heard that right.. Keep reading!

In the Fall 2021 semester, Albertus launched an Esports club in our brand new state of the art Esports facility located in our newly renovated campus center.  Are you gaming in high school?  If so and you want to participate in Esports at Albertus, you would be eligible to receive $1,000 as part of our St. Dominic award.

Have questions about Esports?  Reach out to our club moderator, Jeremy Peterson at jpeterson@albertus.edu.

There are so many other exciting things happening at Albertus… Come visit and check out the Falcon family!

If you are interested in being placed on a waiting list for our future camps, please email admissions@albertus.edu.

Albertus In the News

Game on | Albertus Magnus esports camp is in play once again

Interested in working in the booming and diverse Esports industry? 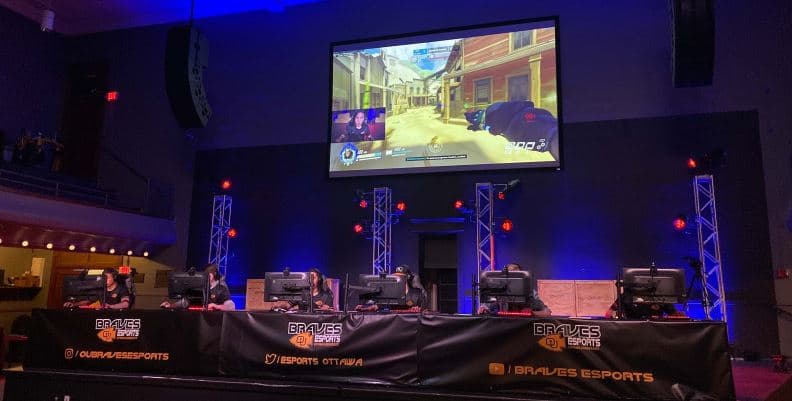 Esports, or competitive video gaming, is a rapidly growing billion dollar industry. Competitors from all around the world compete in different titles such as Call of Duty, League of Legends, Rocket League, and Super Smash Brothers for potentially millions of dollars in prize money. Spectators can watch online or in person and teams are recognized and celebrated as passionately as traditional sport teams. In 2019, Esports titles saw 380 million people spectating worldwide.

Gaming and Esports Club at Albertus

Albertus is working to outfit room 105b in the campus center to be an Esports venue for students to compete, use recreationally, and as a specialized classroom. Although competitive teams are becoming more popular at colleges and universities, few have a dedicated space designed intentionally for Esports. In the coming years, Albertus will be looking to compete and network with other schools' esports programs in the greater New Haven area, throughout the northeast and even the U.S. through tournaments, leagues, and events.