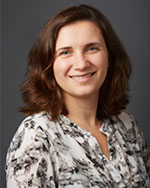 Verica Milivojevic ’04, a resident of East Haven, is the 2022 recipient of the Alumni of the Year Award presented to a living member of the Association who has attained preeminence in their life through outstanding professional, scholarly, and artistic achievement; who is devoted to serving others through volunteer and community service; or who has manifested extraordinary loyalty and dedication to Albertus. Verica came to the US as a displaced refugee from Bosnia and started at Albertus that same year. For years, she stayed involved with her alma mater, serving as a member of the Alumni Association Advisory Board and currently as an adjunct professor teaching courses about the brain, behavior and addiction. Now Dr. Milivojevic, she obtained her PhD in neuroscience and has devoted her career to the field of psychiatry – studying addiction with multifaceted approaches with the ultimate goal to find treatments for those affected by addiction. As an Assistant Professor and Researcher at Yale University, she is part of an interdisciplinary team that studies the role that the biological response to stress plays in addiction and in the high relapse risk in those seeking treatment. Her work has been peer-reviewed and she’s made national and international scientific presentations, has won numerous awards and has received funding for her research and career development from the National Institutes of Health (NIH). Her work is especially important and rewarding during the current serious mental health crisis. 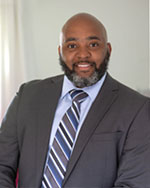 John Watts ’13, a resident of North Haven, is the 2022 recipient of the Premier Achievement Award, presented to a living member of the Association who has graduated from Albertus within the last ten years and who has excelled either professionally, within the community, or has shown extraordinary loyalty and dedication to the College. John is being saluted for his ongoing leadership and dedication to community service. Currently, he is the Chief Probation Officer with the State of Connecticut, where he has been employed for almost 20 years. He is a Criminal Justice practitioner, educator, and mentor to many at-risk youth and justice-involved clients. In 2012, he was selected to be trained in cognitive behavior therapy (CBT) – utilizing risk reduction tools – and is a speaker at national conferences on this now-timely topic. John is an adjunct professor at Gateway Community College and also serves as an adjunct instructor for the Court Support Services Division Training Academy. His Master’s Degree in Leadership from Albertus is serving him well as he is now a Doctoral candidate at Saint Leo University, exploring ways to reduce recidivism.